Dependencies are the bread and butter when planning or managing any kind of project. No task exists in a void, and the harsh reality is that things are often intertwined in such a spaghetti of different relationships, that making sense of them in one’s head becomes straight up impossible.

This is one of the areas where JIRA comes into play. Tasks of any kind can be linked with what Atlassian calls issue links – an infinite number of these can exist in your JIRA instance, with fully customizable names and the ability to add, remove and edit them in bulk.

The BigPicture plugin for JIRA from the get-go aims to merely expand and build on top of existing functionalities. In the case of dependency management, it provides you with a few valuable things. But before we witness them, let us talk a bit about the…

You can create very complex nodes of dependencies, spanning across years’ worth of tasks. However, digging into the gist of it, at any single time you can only create a link between 2 tasks – adding a 3rd task, for example, is just another 2-task operation between task 2 and task 3, and so on. This results in 4 types of arrows, called Start-start, Start-end, End-start, and finally End-end. Each of these can be mapped to any kind of issue link in your JIRA in JIRA Administration->Add Ons->Gantt Configuration:

Only the links selected there will be synchronized bidirectionally and reschedule your tasks.

Programs in BigPicture can contain any number of projects at the same time. This allows you to create links between many projects very easily. In fact, you can link not only tasks, but also the projects themselves! Have a complex company, where multiple large initiatives are scheduled in time one after another? A single Program and a few drag and drops later and you’re good to go.

All of the links are instantly synced to JIRA and between all your Programs.

Links in JIRA serve only an informative purpose – they do not reschedule the tasks. Here is where BigPicture comes into play – if any logical dependency is not met, the tool will try to move your tasks based on their dependencies, so that your plan is valid once again.

Protip: this feature is always active under the hood. If you move a task on Roadmap or Resources, if the auto-scheduling is on and the task dependency is violated, it will move the task overwriting your previous Roadmap/Resources change.

Once your dependencies are in place, seeing the Critical Path is literally 2 clicks away:

When Critical Path is selected, issues that belong to Project Critical Path are highlighted in red. This allows the user to quickly recognize critical items on the Gantt Chart. The Critical Path within a Gantt indicates the series of items which must be completed on time for a project to finish on schedule. Each task on the critical path is a Critical Task. Any delay to the Critical Path would directly result in the delay the overall project’s schedule. In our plugin, when you turn on critical path, tasks that are the most to the right (at the end of project’s life) will be colored in red, as they are the ones bordering (and actually establishing) the final deadline.

Simply click on any of your links to set a lag time value:

Such links will be shown in blue:

Protip: clicking on a link is also how you can easily delete it.

The Roadmap module, where things are scheduled in a broader view with whole Sprints and teams instead of just days and resources, also helps you manage dependencies. Not only does it show cross-Sprint and cross-team connections, but also intelligently analyzes them and highlights the impossible ones in red!

Noticed something? The plugin does look a bit different than before, right? Correct! These screenshots were taken on a development snapshot of upcoming version 6.0, which will feature a completely redesigned interface! We will have a look on what’s new in detail next week, so stay tuned. 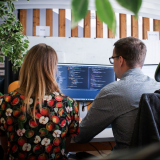